Written by Ha Nguyen
Filed under
Kokichi Mikimoto
Previous / Next On July 11, 1893, the first hemispherical pearl was created by Kokichi Mikimoto's culture technique. He refined the method to create a perfectly round pearl from the Akoya pearl oyster of the Sea of ​​Japan in 1905. His pearl culture technique was patented in 1916. He became one of the 10 greatest inventors in Japan. America's greatest inventor, Thomas Edison, admired these cultured pearls. Kokichi Mikimoto - The King of Pearl

Kokichi Mikimoto was born on January 25, 1858, in Toba, a small town on the Shima Peninsula of Japan. Natural pearls are Toba's most famous local product, but are increasingly scarce due to intensive mining. This led him to the idea of ​​inserting the kernel into the oyster to replicate the natural process of pearl formation.

Natural pearls are created when a small foreign object (sand grain) gets inside an oyster (in the sea), a mussel (in fresh water) and stays in it. Irritated by this foreign object, the oyster/clam creates a layer of mother-of-pearl that surrounds the intruding grain of sand. This process is repeated over time creating beautiful natural pearls.

Pearl culture technique is that people directly artificially implant pearls into oysters caught in the sea. Then put it in an iron cage hanging on the bottom of the sea. Oysters will secrete several layers of mother-of-pearl around the nucleus gradually forming a pearl. Finally, oysters are picked up and cultured pearls are harvested.

The dream of creating a cultured pearl farm was realized by Mr. Kokichi in 1888. Constantly failing due to technical errors, trial and error methods, even the red tide disaster that caused the mass death of mussels.

On July 11, 1893, Mr. Kokichi successfully cultured the first pearl in his life.

The first successfully cultured round pearl shape in 1905

The first pearl shop in Japan, the Mikimoto Pearl Store opened in Tokyo's Ginza shopping district in 1899, laying the foundation for the modern jewelry industry in Japan. Along with the pearl culture technique, the Mikimoto Pearl jeweler has also become an icon of Japanese culture around the world. Mikimoto Kokichi and his Mikimoto Pearls storefronts in Osaka and on the Ginza (Tokyo), c. 1950. Cherry Blossom brooch with cultured pearls by Mikimoto Kokichi and advertised in Japan Times in 1906 with the message: "Genuine fine oriental pearls".

But it took nearly 30 years (the 20s) before Kokichi really made a name for himself in the cultivation and processing of pearls, exhibiting and exporting them around the world.

He also sent a team of researchers to the island of Palau in the South Pacific and succeeded in cultivating pearls there.

In 1917, Shiga Prefecture invited Mr. Mikimoto and his colleagues to apply the technique of culturing pearls at Lake Biwa. After many failed attempts with his son brought from elsewhere. By 1924, they had succeeded using the pearls of Lake Biwa, being able to make 20 pearls in one mussel. This achievement has brought Lake Biwa to play an important role for the Japanese Freshwater Pearls culture technology industry for the Japanese market and into the world market.

In 1919, when Kokichi brought the round cultured pearls from the Gokasho pearl farm to London for an exhibition. It is sold for 25% less than natural pearls. Western jewelry merchants immediately expressed doubts about the quality. They instituted an ordinance against the trade in cultured pearls to prevent counterfeiting of natural pearls. However, it was scientists and researchers from England and France, after studying and scrutinizing the quality of Mr. Kokichi's pearls, confirmed that they were completely similar to natural pearls. This incident made Kokichi Mikimoto's name more famous in Europe with his pearl profession.

In 1926, at the age of 68, Kokichi spent 9 months traveling around the United States just going to universities, visiting laboratories, meeting celebrities, not having any time for sightseeing, traveling. calendar. When he went to Europe, Kokichi visited museums, famous jewelry designers, and when he returned, he discovered another ideal mussel farming area in the Bay of Bengal in the Indian Ocean.

In 1927, on his return trip to America, Kokichi met the great inventor Thomas Edison and was invited to visit his home in West Orange, New Jersey. When viewing Kokichi's cultured pearl, the master of the world's invention Thomas Edison said: "This is not a cultured pearl, but a real pearl. In my lab there are two things that cannot be created, diamonds and pearls. His successful culture of pearls is one of the miracles for all of humanity, something that seemed impossible in biology." At that moment Kokichi replied, "If you are the Moon in the Sky, I would like to be an odd Star in the Milky Way." Their meeting was featured in the New York Times, and Mikimoto and his cultured pearls became famous overnight.

It seems that the entire time of Mr. Kokichi's life is devoted to the research and development of pearl culture industry. Today, his pearl culture technique is applied in all pearl lines on the world jewelry market such as: South Sea Pearl , Tahitian Pearl , Akoya Pearl and Freshwater freshwater cultured pearls. Pearl .

Mr. Kokichi's development of pearl culture in Toba has also helped promote the pearl diving profession of the legendary Japanese female pearl divers . The role of the AMA is to harvest oysters from the seabed and bring them to the farm. After being artificially implanted with pearls, they returned the oysters to the bottom of the sea. When the pearls are formed, they will dive into the sea to harvest the oysters and get the pearls. He is the one who redesigned the traditional white full-body diving costume of the AMAs.

When he turned 90, Kokichi said: “The most important things in life are knowledge and luck, which bring success. If a person lives a long life, it is obvious that he or she is a truly successful person.”

The success of Kokichi Mikimoto was followed and developed by the following generations. Mikimoto Pearl is a leading brand in the pearl and luxury jewelry industry in the world.

In the Mikimoto Pearl Museum on 'Mikimoto Pearl Island', where the first pearl was cultured, is the original Mikimoto pearl chain named 'Taisho-ren' or 'Boss's Necklace', made up of 49 pearls The pearl is large, the water jade is extremely lustrous and perfectly matched, the center jewel is 14mm in diameter. All were hand-picked by Mr. Mikimoto over a period of 10 years. Today, it remains the design template for all classic Mikimoto pearl chains. 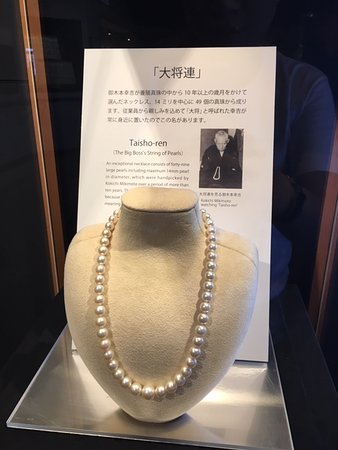